My father, Eucebus Filando Owen Jr., was born 100 years ago, on Aug. 6, 1921, at his parents’ home in White Oak, in North Carolina’s Bladen County, the ninth of 10 children.
He has been gone for more than 37 years, but he will not be forgotten by those who knew him. He was a poster child for the Greatest Generation. He never finished high school, but he was an accomplished man. The things he could do greatly outnumber anything on my résumé.
He could go fishing (cane-pole or surf-casting), clean the fish and cook them up for breakfast the next day. He and his beagles loved hunting. He could shoot a rabbit or squirrel, skin it and cook that, too. He could wade hip-deep in a swamp and come back with a bucket full of huckleberries. He played the guitar on the porch at night. He was partial to “Will There Be Any Stars?” “Ain’t We Crazy?” and “Jambalaya.” He tended a two-acre “garden.” He plowed those acres with a mule. He grew corn, tomatoes, squash, okra, bell peppers, peas, butterbeans, watermelons, cantaloupes, peanuts, cabbage, collards and other things I have forgotten. Some of it was eaten, some of it was canned and a lot of it was given away to friends and family.
He did this in his “spare” time, by the way, before and after working 40 hours a week as a bookkeeper.
Whatever broke at our home, he usually could fix, from the roof to the hot-water heater to the lawn mower. He cooked our breakfast every weekday morning (bacon, scrambled eggs and cinnamon toast, with pancakes on Saturdays). He also made a mean liver and onions. He served his community. He was a deacon and then an elder at Sunnyside Presbyterian Church. He sang in the choir. He pitched for the church softball team until he was in his early 40s. He was the church treasurer and also the treasurer for the local volunteer fire department.
Despite a devastating injury that more or less ended his high school days and left him with a permanent limp when he ran, he served his country. In the war, he was with the first U.S. troops to reach the Nazi death camp at Buchenwald. I have the photos he brought back. When he returned, he never wanted to travel again. The Depression and World War II consumed much of his life through 1945. He knew hunger on a first-name basis. He said the Army was the first place where he was assured of three meals every day.
He was a man’s man, but a kind and gentle one. He did not administer corporal punishment. He loved a good joke and little kids. I would give anything to hear him laugh again. He would have been happy if his children had stayed in Vander for the rest of our lives, but he was happy to see us happy. He was always there for my mother, my sister and me, for his seven brothers and sisters, for his parents, my mother’s parents next door and anyone else who needed his help.
E.F. Owen never made much money, but he gave me more than I could ever repay. Today, and every day, I remember and try to honor him.
Posted by Howard Owen Books at 12:28 PM No comments:

The first Willie Black mystery, Oregon Hill, winner of the Dashiell Hammett Prize in 2012, was launched in Italy in November (NN Editore). The second one, The Philadelphia Quarry, will come out it Italian next year. In the meantime, Willie Black No. 10, Jordan's Branch, launches in the U.S. (Permanent Press) in February or early March. And, I've done the first draft on the one after that, which I'm excited about. It is set in Richmond in 2020, with Black Lives Matter, toppled monuments and the pandemic as the backdrop. In the midst of a pandemic, what are you going to do except write, right?
Posted by Howard Owen Books at 1:39 PM No comments:

The next Willie Black mystery, Belle Isle, comes out this month. It was supposed to launch in May, but the publisher wanted to wait until the pandemic had passed. Well, that didn't happen, but Belle Isle is out anyhow. Promoting a book these days is a little different. I'm doing a couple of virtual book talks and one live one, socially distanced. And, it's on Kindle and as an audio book and on Audible, and somebody's doing the Willie Black books in Italian. The next one, Jordan's Branch, will come out in 2021, which has got to be a better year than this.

Posted by Howard Owen Books at 1:43 PM No comments:

The Associated Press review of Evergreen, the eighth novel in the Willie Black series and my 18th novel overall, came out yesterday, and it was very pleasing. With any series, there is the fear that the latest installment will be met with something less than enthusiasm. It is my hope that each of the Willie Black mysteries will be a good read on its own, even if the reader has no previous knowledge of Willie. There is the fear that reviewers will not pay it much attention, being, in this case, the eighth book with the same protagonist.
That is why Bruce DeSilva's review for the Associated Press (which has a pretty big audience) is so encouraging. Bruce is a great mystery writer, much respected in the journalism and mystery writing communities.
Here it is:

By BRUCE DESILVA
The Associated Press
This cover image released by Permanent Press shows "Evergreen," a release by Howard Owen. (Permanent Press via AP)
“Evergreen,” by Howard Owen (Permanent Press)
When Willie Black was 15 months old, his father, Artie Lee, was killed in an apparent automobile accident. That’s all Willie — police reporter for a Richmond, Virgina, newspaper — knows about his dad. He’s never been curious about the man.
That changes when Willie’s aunt on his father’s side summons him to her deathbed. She’s been tending Artie’s grave in Evergreen, an abandoned cemetery, and now it’s up to Willie to inherit the chore.
Readers of Howard Owen’s underappreciated Willie Black novels already know that Willie’s father was black, that his mother was white, and that they weren’t allowed to marry in 1960s Virginia. But in “Evergreen,” the eighth book in the series, they’ll grow as curious as Willie about what really put Artie in his grave.
Finding out is no easy task.
Willie’s mother won’t say and urges Willie to drop it.
Artie’s old pals reminisce about his saxophone playing but clam up about his death.
The police chief says there were rumors that the car crash was no accident but has no details.
Old newspaper files are no help. The death of a black man didn’t merit a news story in 1961 Virginia.
Patiently, Willie squeezes a few minor details from townsfolk old enough to remember Artie. Each time he gets a scrap of information, he circles back, telling the witnesses what he knows and teasing out a bit more. He does this so skillfully that it is a pleasure to watch him work.
Eventually, he learns that Artie’s death was connected to a Ku Klux Klan rally, a car bombing and a series of betrayals by friends and relatives who were threatened by racist police officers unless they talked. The result is a conclusion that is both wrenching and satisfying.
Readers seeking the thrills of most popular crime fiction won’t find it here. Instead, they will find a textured, emotionally charged tale about coming to terms with growing up biracial in America told in the precise language of a writer who honed his craft during 44 years in the newspaper business.
___
Bruce DeSilva , winner of the Mystery Writers of America’s Edgar Award, is the author of the Mulligan crime novels including “The Dread Line.”

Posted by Howard Owen Books at 2:19 PM No comments: 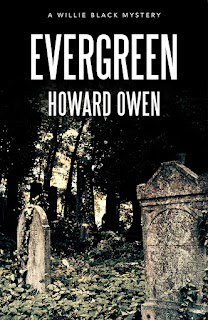 My eighth Willie Black mystery, and 18th novel overall, "Evergreen," comes out in late July. In this one, Willie is asked to take over the maintenance of his late father's grave, in an abandoned cemetery on Richmond's East End. Willie didn't even know where his father was buried, but when he starts digging, so to speak, he finds out that there was a lot more he didn't know about Artie Lee.

I've been doing the Willie Black series for about a decade now. A ninth installment is coming; I'm finishing up the first draft. I find that there is no dearth of settings around Richmond for Willie's adventures and misadventures and hope you have enjoyed reading them as much as I've enjoyed writing them. I'm sure that I will occasionally step back and write something non-Willie, like the well-received "Annie's Bones." However, I can't stay away from Willie and his large population of friends, family, enemies and frenemies for very long. It occurred to me early on, as I was writing the short story, "The Thirteenth Floor," that gave birth to Willie Black, that a hard-ridden night cops reporter in the waning days of print newspapers was a gold mine for anyone trying to write noir.

Evergreen Cemetery is on the far east end of Richmond. It is an African-American cemetery that was abandoned after it was built out and is now a ghost land of tombstones overtaken by kudzu and greenbriers, overshadowed by full-grown trees and only recently the focus of a major reclamation project. All in all, not a bad place to set a mystery.
Posted by Howard Owen Books at 1:36 PM No comments:

My latest novel, Annie's Bones, just got a very good review from PW. Willie Black has only a cameo in this one. Willie will be back in Scuffletown, which is set to come out in January of 2019.
Here's the review: 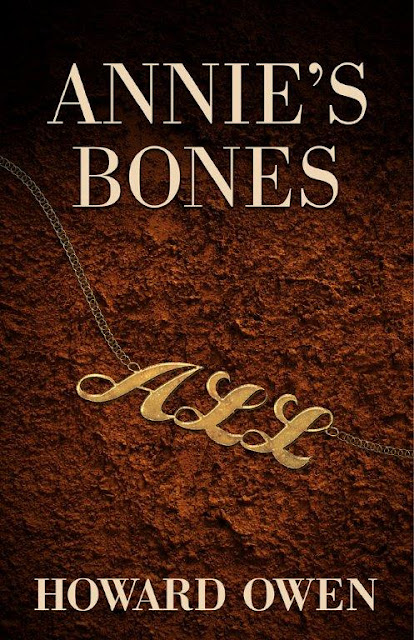 In 1968, Grayson Melvin, the protagonist of this moving, well-crafted standalone from Owen
(The Reckoning), meets the love of his life, Annie Lineberger, when they’re both college
students in North Carolina. When Annie breaks up with him, he tells her to get out of his car. She
scrambles out and is never seen again. Grayson is the primary suspect in her disappearance, but
without any evidence he moves on—always followed by a cloud. In 2016, Annie’s bones are
found in Portman, Va., and Grayson’s nightmare begins again. He gets support from only a few
people, including Richmond, Va., reporter Willie Black (the lead of Owen’s The Devil’s
Triangle and five other mysteries). Arrayed against him are public opinion, seemingly every
lawman in the area, and Annie’s unforgiving brother, Hayden. The discovery of Grayson’s high
school senior class ring, which he last saw when he refused to take it back from Annie at the time
she left him, puts Grayson on a tortuous path that eventually leads to answers that may or may
not explain what happened. This tale of loss and redemption will resonate with many readers.
(Apr.)
Posted by Howard Owen Books at 11:26 AM No comments:

Howard Owen Books
Award-winning writer Howard Owen was born in Fayetteville, North Carolina. He graduated from the University of North Carolina at Chapel Hill with a journalism degree and earned a master’s degree in English from Virginia Commonwealth University. Howard's first novel, "Littlejohn," was published by The Permanent Press in 1992. Random House bought and reissued it as a Villard hardcover in 1993 and a Vintage Contemporary paperback in 1994. It was nominated for the Abbey Award (American Booksellers) and Discovery (Barnes & Noble) award for best new fiction. It has sold, in all, more than 50,000 copies. It has been printed in Japanese, French and Korean; it has been a Doubleday Book Club selection; audio and large-print editions have been issued, and movie option rights have been sold.